The third and final Elite Circuit Championship is in the books and we have our third Champion: Traitor Joe! This victory will place him in the Grand Final alongside Dust and Emikaela. A longtime Legends player, he set some time aside to chat with us about how his experience helped him achieve this impressive result.

Congratulations on winning the third Elite Circuit Championship! Before this win, how long have you been playing Legends, and what are some of your other notable accomplishments?

Thanks! I’ve played Legends for about 10 months now - I began at the end of June last year just before the Skyrim expansion dropped. Other TESL accomplishments, I’ve got a few #1 ladder finishes under my belt as well as a few other tournament wins - though this TCS Championship is my proudest.

You’ve been regarded as one of Legends’ most consistent players in recent months. To what do you attribute that success?

I play too much. But apart from sheer amount of playtime, I’ve developed great friendships with some very strong players and the friendly competition/smack-talk between us is what I would credit as being most instrumental to my personal growth and consistency as a player. 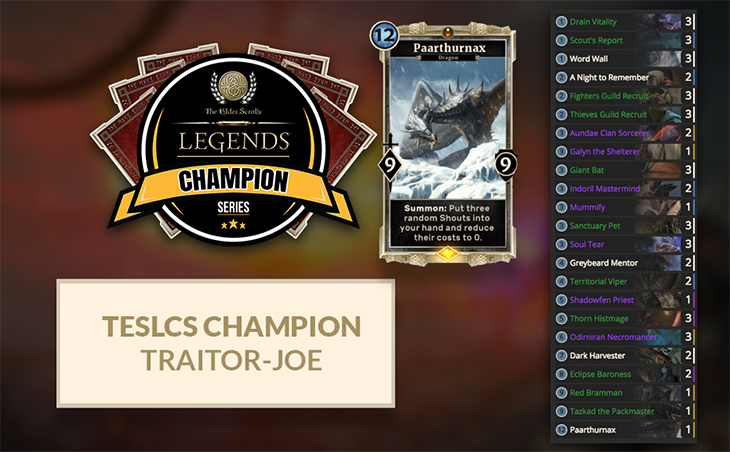 How did you come up with the lineup of decks you chose for the third Championship?

I brought Mid Battlemage because of how well-rounded it is. In this format it’s important to have a deck that has very few poor matchups so that if your opponent presents decks that would crush your other two, you have a relatively safe lead and can counterpick using your more polarized decks. I brought Control Scout as an answer to any late-game-focused control decks that managed to get on top of the Battlemage. It is an incredibly flexible deck that can reliably shut down most other late-game-focused decks, while maintaining the ability to highroll faster decks. The Control Dagoth list was kind of a wildcard I chose the night before the tournament. After days of testing I couldn’t find a third list I really liked, but I’d recently crafted premium Hands of Dagoth, so it seemed like the obvious fallback choice. As for the archetype, I chose to go the control route to fill the potential aggro weakness that my other decks suffer. I changed a few cards around, but credit to Aquaman for the original list.

Of your three decks, which performed the best? Looking back, would you have changed anything about your lineup?

The Dagoth list performed the best by far with a record of 10-0, though it wasn’t particularly fair as I played only 3 games with the Battlemage and none with the Scout. I attribute this entirely to the premium Hands of Dagoth.

Having won, I can’t say I’m at all displeased with the way my lineup performed, but I do feel that I had a notable Scout weakness and was fortunate not to run into any (apart from Petamax’s, which is not in fact a Scout, but an Abomination). I may have tweaked the decks a bit or replaced one of them to try to mend this weakness. 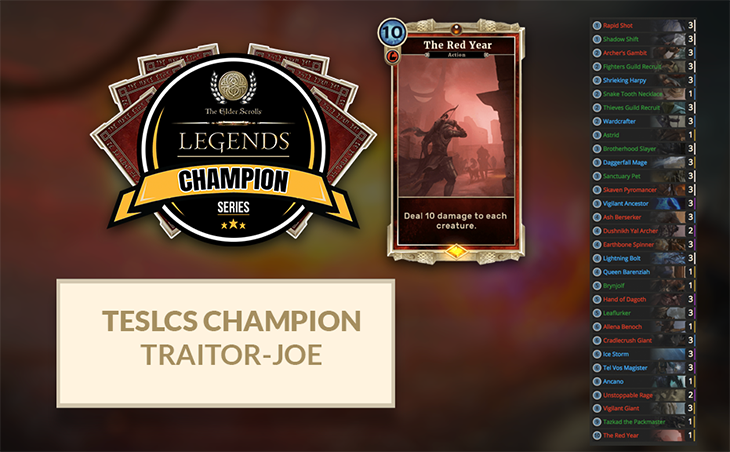 The field for the Grand Final is looking tough, with yourself, Dust, and Emikaela (as well as the winner between Warriors7 and Petamax). How do you think you’ll prepare for the event, and are you confident?

Yeah, this grand final has a great lineup, I can’t wait. As part of my preparation I’ve developed a First Rune Prophecy dance that I will perform on a daily basis leading up to and perhaps during the tournament. In addition, I’ll continue testing both on ladder and with friends and keep an eye on what’s performing well for others in the tournaments in the coming week. I’ll probably be switching up my lineup from the one used in this championship as I don’t want to be so predictable. With that said, I am quite confident. Never so confident as to think I’m favored by default to win over my competitors, but confident that I have as good a chance as any of them. I’ll bring my best, as I expect them to do, and look forward to some great games. But I’m mostly relying on the dance. 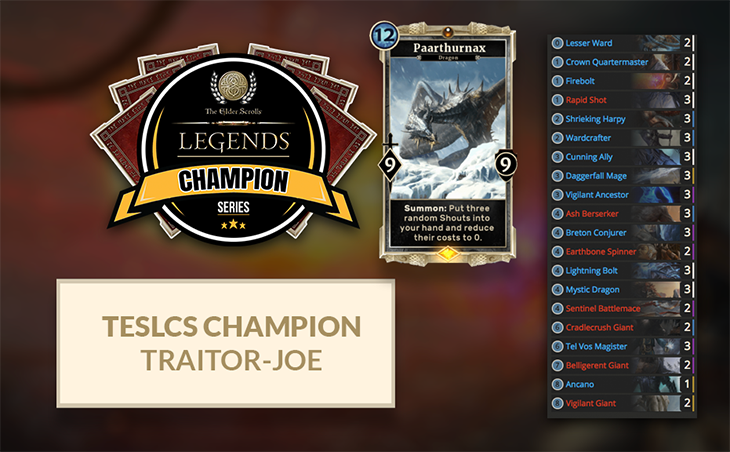 One big thing I’d like to say is that there’s absolutely no skill requirement to start playing in TESL tournaments. I’ve had a number of people say to me that they’ll start entering when they feel they’re strong enough players. The issue is that tournaments are one of the best - if not the absolute best - places to become a better player. I got crushed in the first round of my first seven or eight tournaments, and still lose in the first round more often than I’d like. It’s a card game, it happens to everyone. They’re a lot of fun and there’s nothing to lose - just start entering and don’t take it too seriously.

I think I’m going to refrain from shouting out specific names as I will inevitably omit someone or other and feel bad about it later. I will say that I immensely appreciate my practice partners, the admins/casters that make these tournaments happen, the streamers/content creators that bring our community together, and the community itself. Y'all are awesome and I’m happy to be a part of it.

We’re glad to have you, too! Congratulations once again, and best of luck in the upcoming Grand Final.