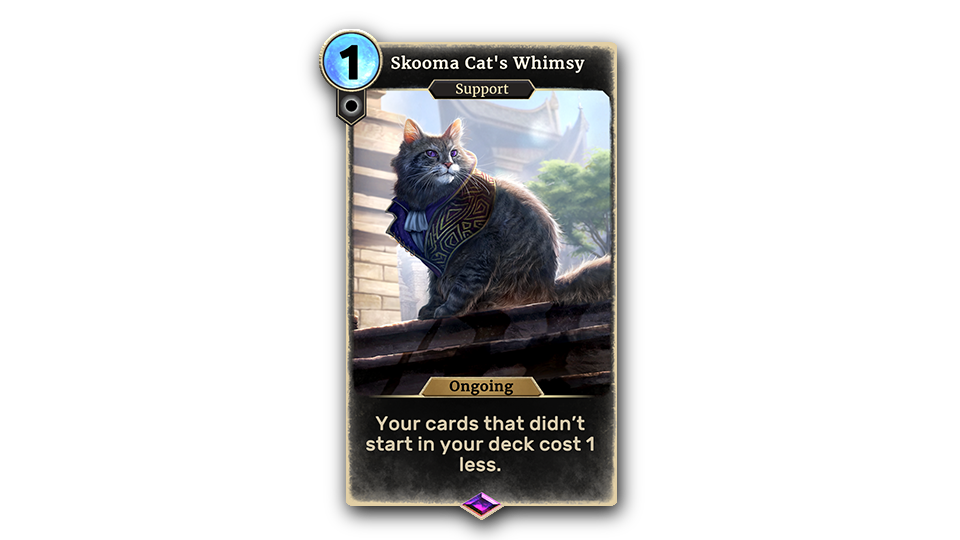 Skooma Cat’s Whimsy features a simple effect: While it’s in play, cards in your hand that didn’t originally start in your deck cost 1 less Magicka to play. Like last month’s monthly reward card, this ongoing Support only costs one magicka, making it easy to play as soon as you draw it so you can reap the benefits as soon as possible.

As for obtaining cards from outside your deck, cards like Battlemage’s Onslaught and Mudcrab Merchant can let you surprise your opponent with random, unexpected cards at a discount. For a more controlled outcome, you’ll know exactly what you’re getting with something like Daggerfall Mage or Sentinel Reclaimer. Of course, if you really want to frustrate your opponents, you can steal directly from their deck with Thieves Guild Shadowfoot and then play their own cards against them for cheap! Since Skooma Cat’s Whimsy is a Neutral card, you can add it into any deck you can cook up.

No matter what cards you’re discounting with Skooma Cat’s Whimsy, make sure to head into Ranked Play by the end of August to secure your copies. As with all our monthly reward cards, reaching rank 9 in our ranked ladder by the end of the month will award you one copy, rank 5 will earn you the second and if you finish rank 1 or higher you’ll get a full playset. In addition, if you’re able to finish in the top 1,000 Legend ranks, your playset will be premium!