The following balance changes, which are scheduled to go into effect early next week, are being made to impact the power level of several of the most powerful decks in the post-Houses of Morrowind metagame, while not rendering them unplayable. Uprising/Shout-focused decks in Scout and Telvanni will see an adjustment to several of their most efficient cards to keep them in line with what other decks are capable of, and Aggro Hlaalu’s adjustment to Haunted Manor will make it less strictly beneficial. In addition, several other cards that have been seeing a high level of play have been adjusted. 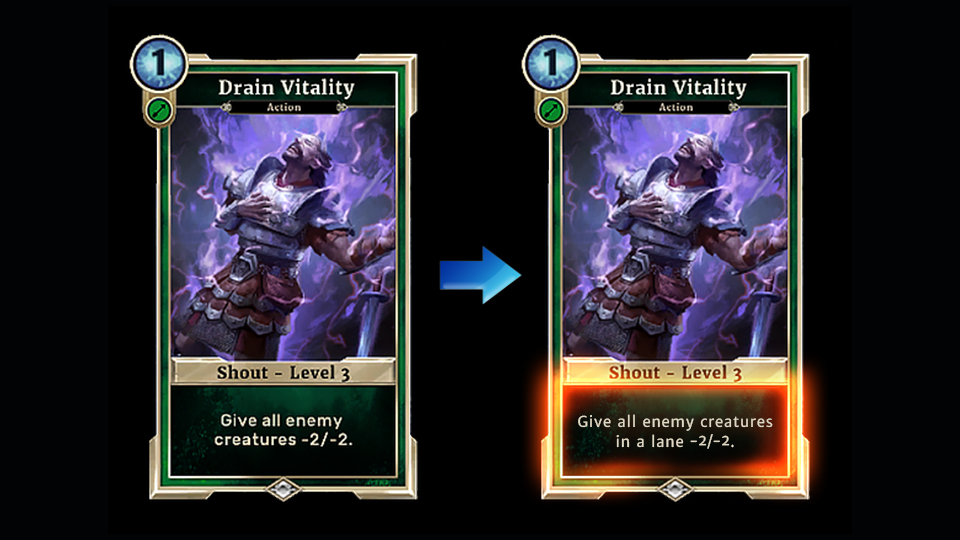 While we recognize that Drain Vitality is a critical defensive component to many slower decks using Agility and requires a substantial amount of deck space to reach maximum consistency (usually including Word Walls and Greybeard Mentors), we found its current design was both easy to weave into a turn and hard to play around. While in many situations, Drain Vitality will continue to act as a board clear at level three, this change will give players who know they’re facing a Drain Vitality effect a chance to reduce its impact by choosing their lane placement more carefully in much the same way as a card like Dawn’s Wrath allows for. 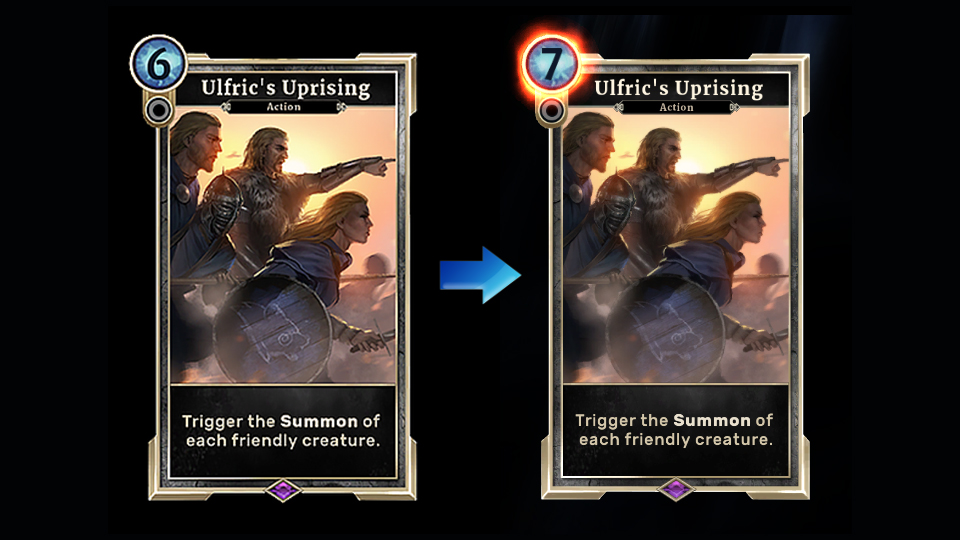 Ulfric’s Uprising has become one of the staple cards of Control decks in the Scout and Telvanni classes, as these combinations of attributes have a wide variety of powerful Summon effects. Its power level has started causing it to appear in Control decks of other classes as well as functioning as a key component of the devastating Nix-Ox Combo. This change will allow the card to stay a powerful value-generating option for certain decks while making it harder to use effectively when the player is pressed for Magicka in a turn. 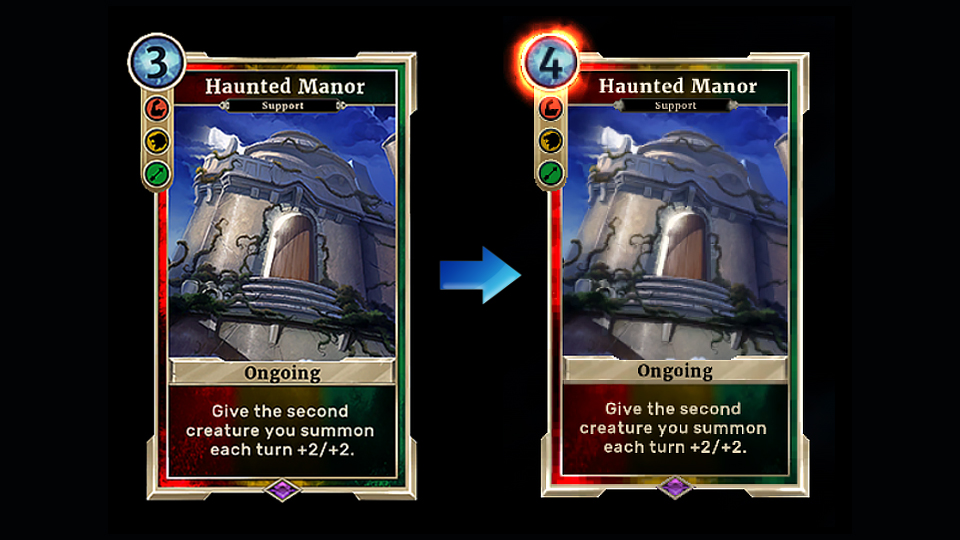 Hlaalu has been the most popular class/house for aggressive decks since Houses of Morrowind’s release. In order to impact the deck’s popularity without negatively affecting other aggressive decks, one of the Hlaalu-specific cards needed to be adjusted. Hlaalu Oathman was a popular suggestion, but requires a bit more set-up - which was actually significantly helped by Haunted Manor only costing three magicka, as players could use the Ring of Magicka to play Haunted Manor immediately followed by Hlaalu Oathman on turn three, reaping the benefits of both cards. The Manor’s increased cost will make combos like that a bit more difficult to pull off, align it close to popular Support removal cards, and give other decks more room to breathe. 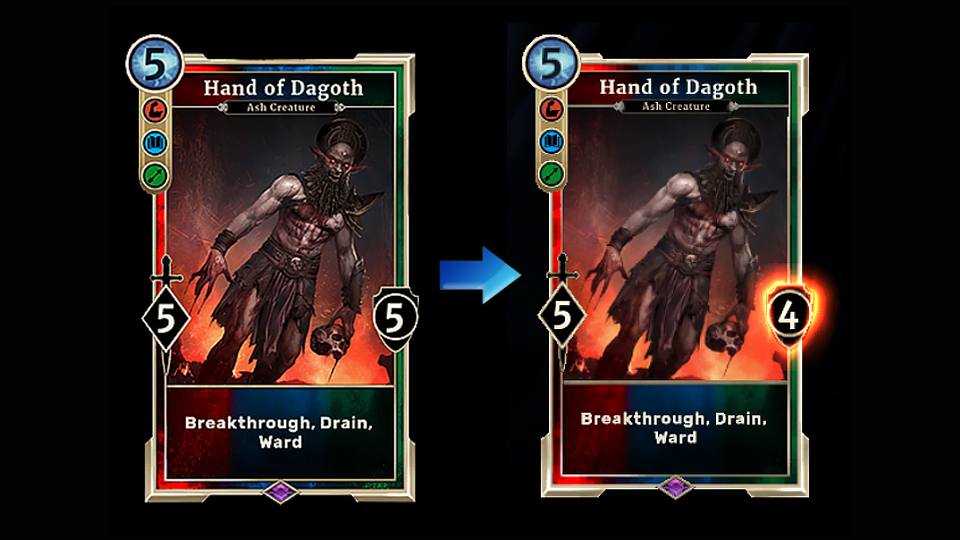 Hand of Dagoth has proven to be a staple in Dagoth decks - which we like! However, we found it just a little too resilient against other Midrange decks. This change will hopefully keep it resilient enough to be a top-tier threat while making the card a little more manageable in a race. 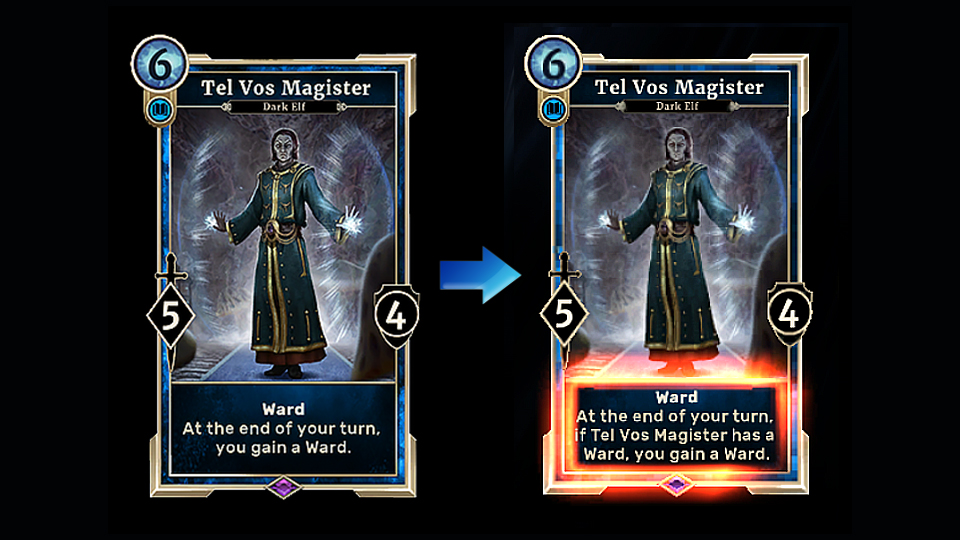 This is another resilient card thanks to Ward, and is the first instance of a player being able to have Ward that we’ve seen in Legends. Tel Vos Magister has proven to be a very powerful tool against aggressive decks - a bit too powerful, in fact. For many aggressive Midrange strategies, dealing with the Tel Vos Magister’s Ward and its four health, all while being slowed down by Wards on the opponent each turn, was just too much of an ask. With this change, these decks won’t necessarily have to actually remove or silence the Tel Vos Magister after getting rid of the card’s Ward to power through its effect. And, of course, the player controlling Tel Vos will have the option to give Ward back to it using a card like Wardcrafter to restart its effect! 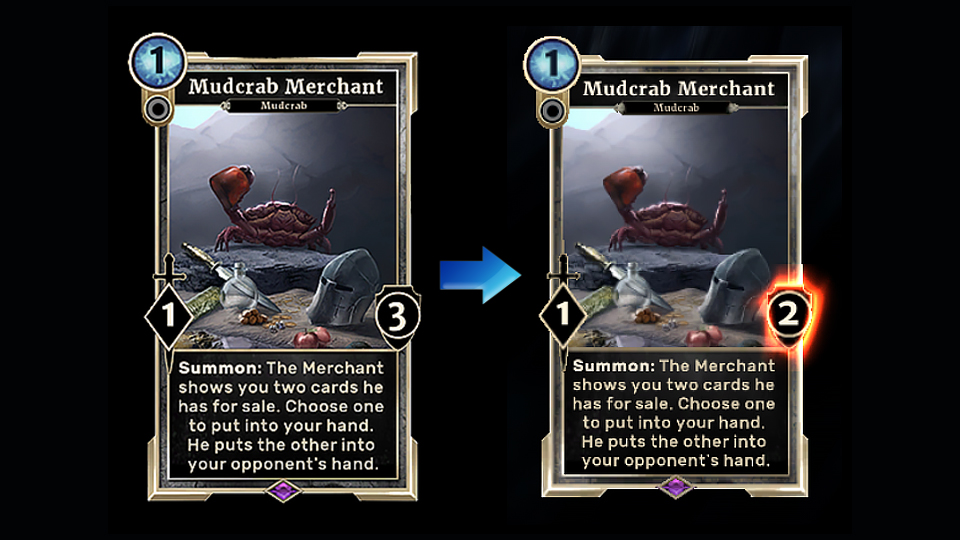 Mudcrab Merchant has proven itself to be a very powerful one-cost creature, and while we like having powerful one-cost creatures in Legends, we aren’t a fan of such power level on a random effect with this wide of a scope. Mudcrab Merchant pulling any cards from the game is much different from effects that have a small pool of possible results, and that effect was impacting too many games at the tournament level. We recognize that the Merchant is a fan favorite for some and RNG-based effects have their place; as a result, we are keeping the core of the card in tact while giving the Mudcrab poorer stats, which should balance out the effect’s power level and make it less of a hindrance to competitive play. 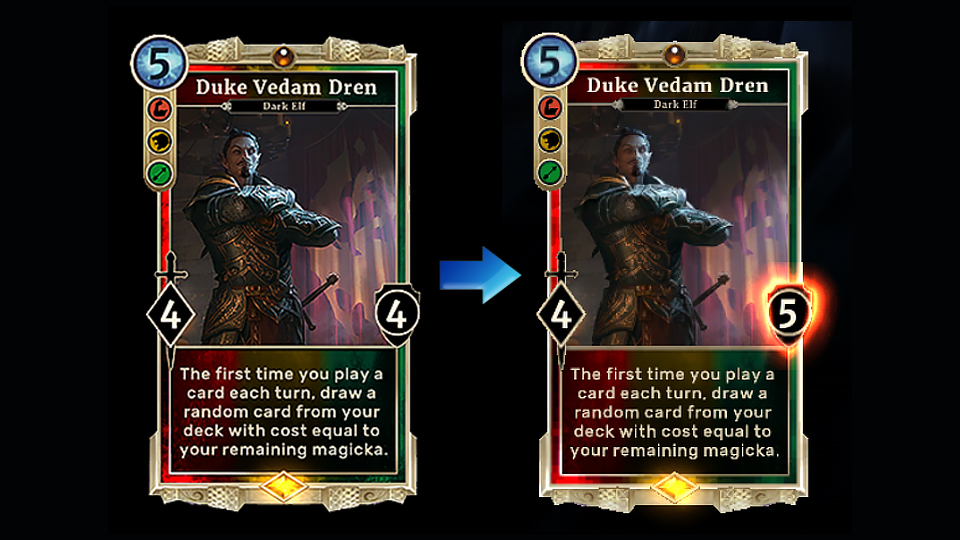 Duke Vedam Dren has seen very little play since its inception. One of the major downsides is that it has to survive a whole turn before it can generate any value from its effect. The increased health will allow it to now survive Lightning Bolts and make it a bit harder for other creatures to trade into, thus increasing the consistency of the card.

Soul Summoned copies of Drain Vitality, Ulfric’s Uprising, Haunted Manor, Hand of Dagoth, Tel Vos Magister, and Mudcrab Merchant will be able to be Soul Trapped for their full value for two weeks following the changes.