Following up last month’s Yagrum’s Workshop, another powerful Support card is up for grabs in the November Ranked Play season. 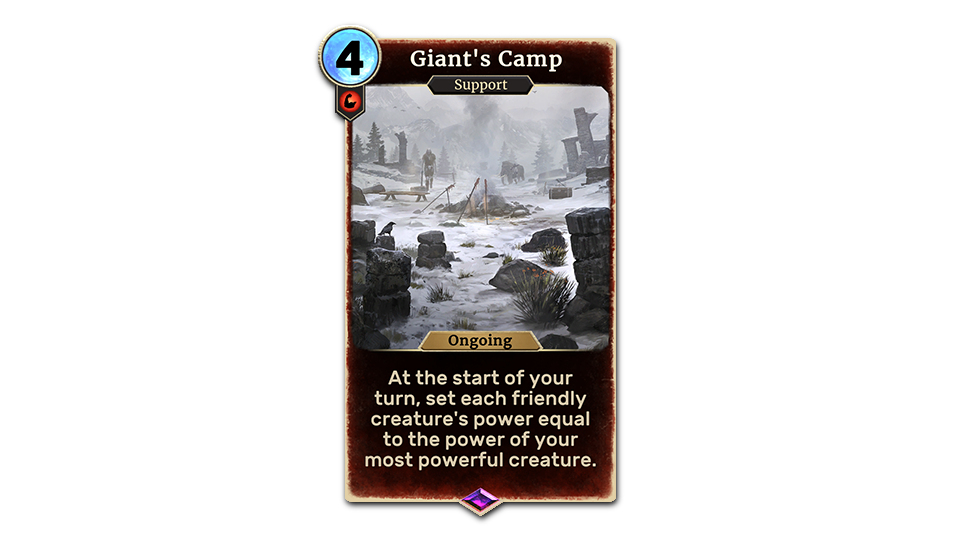 Giant’s Camp is a 4-magicka Support from the Strength attribute and since it’s Ongoing, it remains in play until the end of the game or until your opponent can find a way to destroy it. Every single turn, the Camp sets each friendly creature’s power to match the highest-powered creature you have in play!

Giant’s Camp does require your strongest creature to survive a turn before setting your other creatures to its power, but it can quickly generate a ton of damage for you with just one bigger creature at your disposal. Take, for example, a 9/1 Bog Lurcher and three 1/1 Imperial Grunts; if left in play with Giant’s Camp up, go from 12 total power to 36 power at the start of your next turn. That’s enough for lethal!

Of course, there are tons of more practical cards to play alongside Giant’s Camp than a fragile Bog Lurcher and even just a bit of extra power added to your whole board each turn can add up over time. With Giant’s Camp, you’ll always be forcing your opponent to answer your most powerful creature to prevent its power from spreading and that might be easier said than done.

No matter which creature’s you’ll be buffing with Giant’s Camp, make sure to head into Ranked by the end of the month to earn your copies! As with all our monthly reward cards, reaching rank 9 in our ranked ladder by the end of the month will award you one copy, rank 5 will earn you the second and if you finish rank 1 or higher you’ll get a full playset. In addition, if you’re able to finish in the top 1,000 Legend ranks, your playset will be premium!