This month, we’re returning to the Sorcerer class and introducing a Skeleton with a very powerful effect. If you’re a fan of the Consume mechanic from the Moons of Elsweyr expansion, this is one card you won’t want to miss out on. Say hello to Headless Zombie! 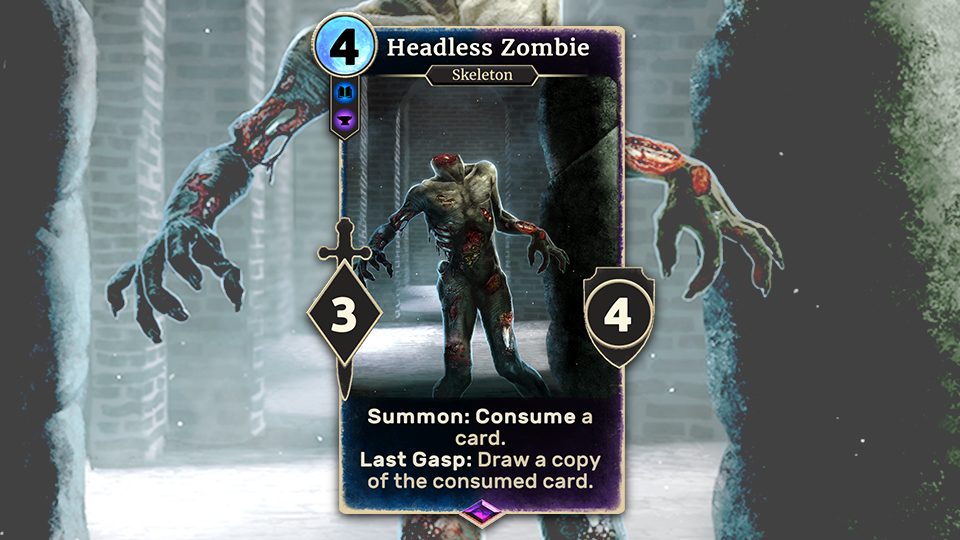 Headless Zombie, like many Sorcerer cards, makes up for its modest stats with a powerful effect rewarding those who play it right. When summoned, it’ll Consume a card in your discard pile, banishing it from play. When the Zombie is eventually destroyed, however, you’ll then draw a copy of whatever card you Consumed earlier.

Though certain cards give creatures benefits when they’re Consumed, it often doesn't matter which card in the discard pile players choose most of the time. Headless Zombie changes all that, allowing you to actively select a card you know you’ll want to see later in order to get the most out of it. If you plan correctly, getting the right card from the Zombie’s Last Gasp effect might be the difference between victory and defeat.

If you don’t want to wait around for Headless Zombie to be destroyed, consider pairing it with cards like Cruel Firebloom that let you sacrifice your own creatures - or just place it in a lane with three other creatures, allowing you to sacrifice it when you summon another creature to the full lane.

No matter how you plan to make use of Headless Zombie, make sure you head into the ranked ladder today to earn your copies! As with all our monthly reward cards, reaching rank 9 in our ranked ladder by the end of the month will award you one copy, rank 5 will earn you the second and if you finish rank 1 or higher you’ll get a full playset. In addition, if you’re able to finish in the top 1,000 Legend ranks, your playset will be premium!