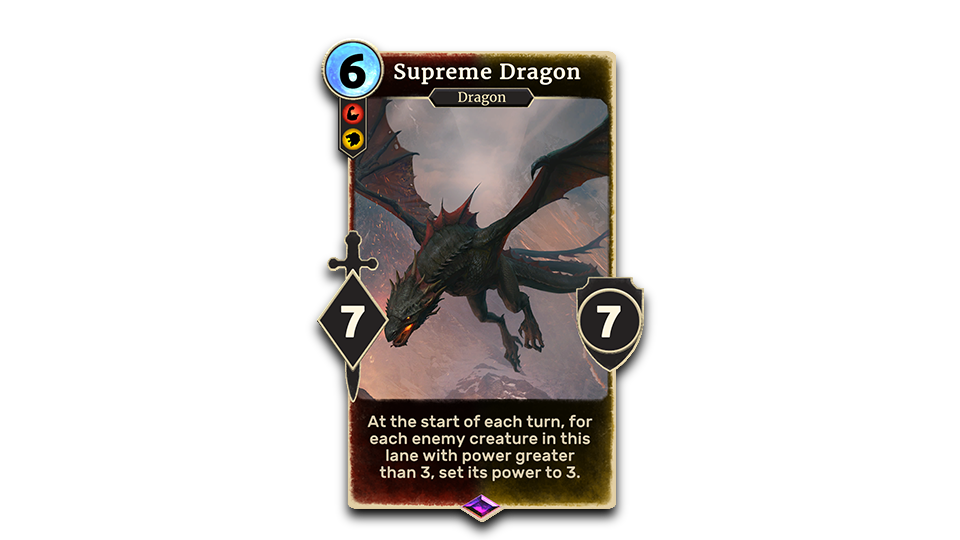 Coming from the Crusader class (Strength plus Willpower), Supreme Dragon lives up to its name. Not only does it have an impressive stat line of 7/7 for six Magicka, it also comes with a devastating effect: At the start of each turn, Supreme Dragon sets each enemy creature with power greater than 3 to exactly 3.

If your opponent has been building an army of relatively large creatures, Supreme Dragon swiftly makes their board that much less threatening. Additionally, since this is a recurring effect, your opponent is going to feel pressured to take out Supreme Dragon quickly. If they don’t, any big creatures they play on their turn will be reduced to 3 power as soon as your turn starts!

Whether you’ll be slotting Supreme Dragon into a dedicated Dragon deck or using it as a standalone threat, make sure you head into Ranked Play and earn your copies before the end of the month! As with all our monthly reward cards, reaching rank 9 in our ranked ladder by the end of March will award you one copy, rank 5 will earn you the second and if you finish rank 1 or higher you’ll get a full playset. In addition, if you’re able to finish in the top 1,000 Legend ranks, your playset will be premium!