As the ranked play season ends, it’s time to reveal the monthly reward card for February. For the first time in a while, a new support card is coming to Legends: Skyshard! 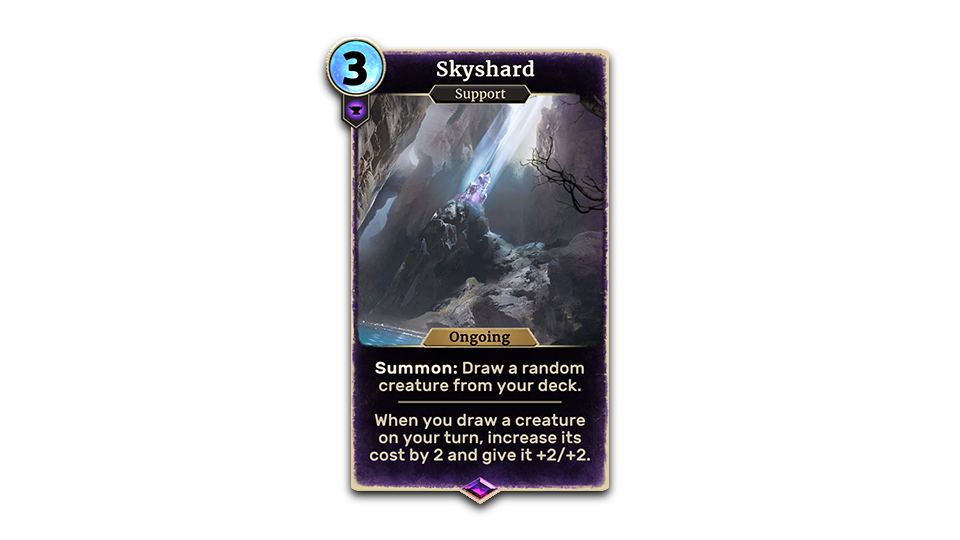 Skyshard is an ongoing support in the Endurance attribute with a cost of three magicka. Unlike many ongoing supports, which stay on the board after they’re played, Skyshard also comes with a Summon effect. Playing Skyshard immediately draws a random creature from your deck – as well as kicks in the card’s ongoing effect.

As long as Skyshard’s in play, creatures you draw gain a +2/+2 buff…but also cost two additional magicka to summon. A double-edged sword, but still a powerful one in the right deck – for example, one that cares a lot more about its creatures’ stats than their cost.

In a deck focused on magicka ramp, you’ll be able to reap the benefits of Skyshard in the late game, as you’ll have more than enough magicka to work with by that point. Cards that make your creatures battle other creatures, like Squish the Wimpy and Unstoppable Rage, also benefit from the stat increase. Additionally, a little extra power and health can make drawing weaker early game creatures more useful later on!

No matter how you plan to make use of Skyshard, make sure you head into the ranked ladder today to earn your copies! As with all our monthly reward cards, reaching rank 9 in our ranked ladder by the end of the month will award you one copy, rank 5 will earn you the second and if you finish rank 1 or higher you’ll get a full playset. In addition, if you’re able to finish in the top 1,000 Legend ranks, your playset will be premium!