December’s ranked play season is ending – not to mention the year itself – and it’s time to introduce the next monthly reward card coming to The Elder Scrolls: Legends this month: Ayleid Guardian! 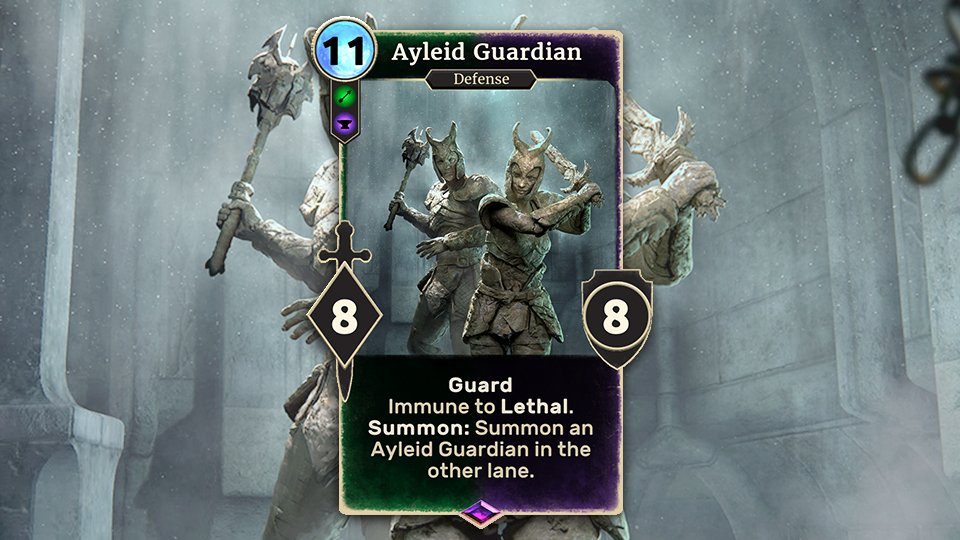 We’re returning to the Scout class with this month’s card! Ayleid Guardian combines Agility and Endurance attributes for a major payoff in Legends’ late game. Thankfully, weathering an opponent’s attack is the Scout class’ specialty. (That, and quickly ramping up their maximum magicka!)

Ayleid Guardian immediately creates a copy of itself in the other lane when summoned – netting a player 16/16’s worth of stats for eleven magicka! That alone is a sweet deal, but the Guardian’s benefits get even better.

Both 8/8 Guardians in play feature the Guard keyword, so your opponent won’t be able to just swing past them and close the game themselves. The Guardians are also immune to Lethal, so quickly removing them with a pesky Territorial Viper or Fighters Guild Recruit isn’t and option! Simply put, you opponent needs serious removal to deal with Ayleid Guardian’s powerhouse defense.

What are you waiting for? Head into the ranked ladder today to earn your Ayleid Guardian! As with all our monthly reward cards, reaching rank 9 in our ranked ladder by the end of the month will award you one copy, rank 5 will earn you the second and if you finish rank 1 or higher, you’ll get a full playset. In addition, if you’re able to finish in the top 1,000 Legend ranks, your playset will be premium!