This month’s reward card, set in the workshop of the Dwemer Yagrum Bagarn, will prove to be a powerful new addition to decks based around Neutral-attribute cards! 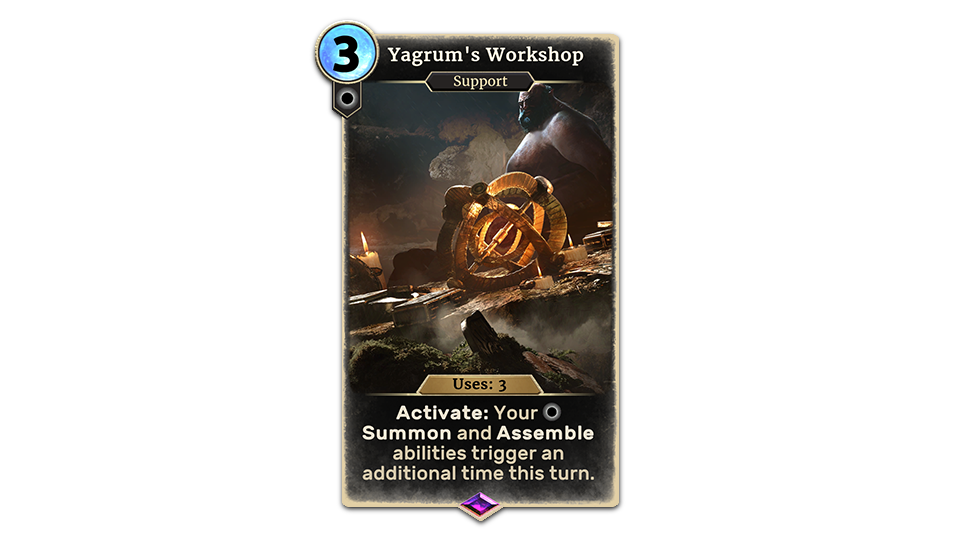 Yagrum’s Workshop is a 3-cost Support card with three total uses. When you activate the workshop, the Summon and Assemble abilities on Neutral cards you play trigger an additional time. This effect lasts the whole turn, so you’ll be able to reap the benefits of this card on three turns of your choosing throughout the game - and if you have multiple copies of this card in play, you can activate them both on the same turn to get even more value out of your effects!

The two main creature types in Neutral are Dwemer and Factotum, both featuring several powerful effects worth duplicating with Yagrum’s Workshop. Factotums such as the powerful Assembled Titan can increase their stats with their Assemble effects, while Dwemer cards like Yagrum Bagarn himself recycles your previously destroyed Dwemer. While those two are creature types players most often build around in Neutral, the Workshop is effective with any Neutral Summon effect such as Mudcrab Merchant, Barbas or Wilds Incarnate.

There are a bunch of interesting effects found in Neutral to explore with Yagrum’s Workshop, but first, you’ll have to earn your copies in ranked play. As with all our monthly reward cards, reaching rank 9 in our ranked ladder by the end of the month will award you one copy, rank 5 will earn you the second and if you finish rank 1 or higher you’ll get a full playset. In addition, if you’re able to finish in the top 1,000 Legend ranks, your playset will be premium!