As we approach the end of the May Ranked Play season, it’s time to reveal this month’s reward card: Priest of Mara! 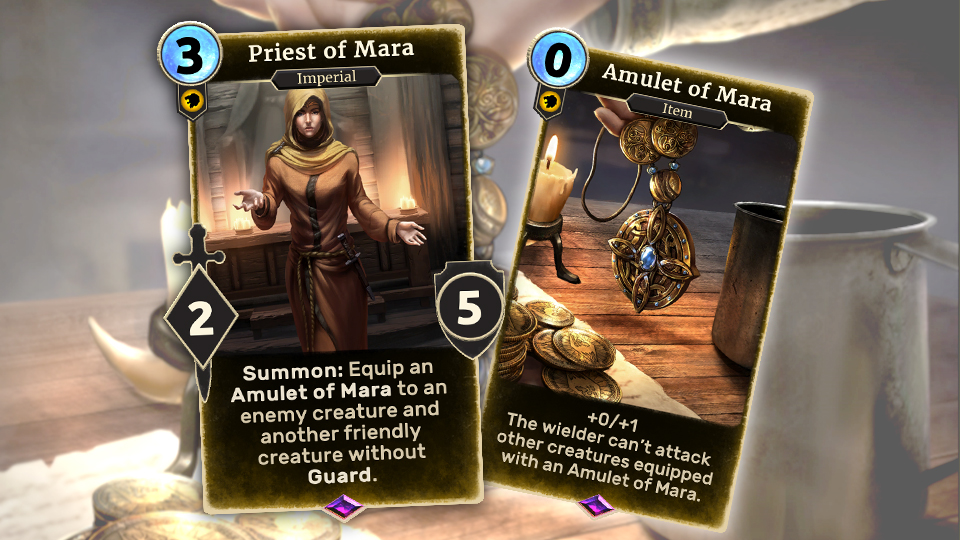 Mara, one of the Nine Divines and the goddess of love, is bringing some peace to Legends with this month’s reward card. When you summon Priest of Mara, one of your other creatures and an enemy creature each equip an Amulet of Mara. These Amulets, necessary for marriage in Skyrim, prevent the creatures they’re equipped to from attacking each other!

Forging a peaceful relationship between your creatures and your opponent’s can have strategic benefits; since Priest of Mara only costs 3 magicka, for example, it can come down when there are relatively few creatures in play. If you’ve just played a creature that you’d prefer stick around for a while, such as Fifth Legion Trainer, and there’s only one opposing creature contesting its lane, you can make sure it won’t be in an immediate threat.

If you have some good ideas for creatures to equip with Amulets, make sure you head into ranked play today to earn your copies of Priest of Mara! As with all our monthly reward cards, reaching rank 9 in our ranked ladder by the end of May will award you one copy, rank 5 will earn you the second and if you finish rank 1 or higher you’ll get a full playset. In addition, if you’re able to finish in the top 1,000 Legend ranks, your playset will be premium!